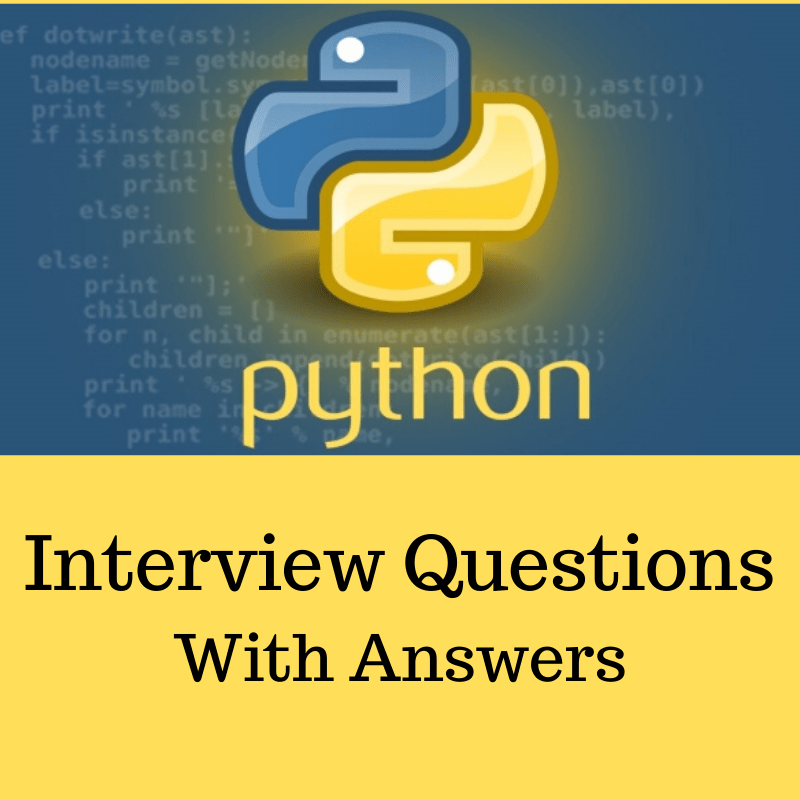 We have 45+ questions on Python Programming basics which will help you with different expertise levels to reap the maximum benefit from our blog. Our Python Interview Questions is the one-stop resource from where you can boost your interview preparation.

Q.1- What is Python? What are the benefits of using Python?

Ans: Python is a programming language with objects, modules, threads, exceptions and automatic memory management. The benefits of pythons are that it is simple and easy, portable, extensible, build-in data structure and it is open-source.

Ans: PEP 8 is a coding convention, a set of recommendations, about how to write your Python code more readable.

Q.3- What is pickling and unpickling?

Q.4- How Python is interpreted?

Ans: Python language is an interpreted language. Python program runs directly from the source code. It converts the source code that is written by the programmer into an intermediate language, which is again translated into machine language that has to be executed.

Q.5- How memory is managed in Python?

Q.6- What are the tools that help to find bugs or perform the static analysis?

Ans: PyChecker is a static analysis tool that detects the bugs in Python source code and warns about the style and complexity of the bug. Pylint is another tool that verifies whether the module meets the coding standard.

Q.7- What are Python decorators?

Ans: A Python decorator is a specific change that we make in Python syntax to alter functions easily.

Q.8- What is the difference between list and tuple?

Ans: The difference between list and tuple is that the list is mutable while tuple is not. Tuple can be hashed for e.g. as a key for dictionaries.

Q.9- How are arguments passed by value or by reference?

Ans: Everything in Python is an object and all variables hold references to the objects. The reference values are according to the functions; as a result, you cannot change the value of the references. However, you can change the objects if it is mutable.

Ans: They are syntax constructions to ease the creation of a Dictionary or List based on existing iterable.

Q.11- In Python what are iterators?

Ans: A unit testing framework in Python is known as unit test. It supports the sharing of setups, automation testing, shutdown code for tests, aggregation of tests into collections, etc.

Ans: A mechanism to select a range of items from sequence types like list, tuple, strings etc. is known as slicing.

Q.14- What are generators in Python?

Ans: The way of implementing iterators are known as generators. It is a normal function except that it yields expression in the function.

Q.15- What is docstring in Python?

Ans: A Python documentation string is known as docstring, it is a way of documenting Python functions, modules and classes.

Q.16- What are the built-in type does python provides?

Q.17- What is namespace in Python?

Ans: In Python, every name introduced has a place where it lives and can be hooked for. This is known as namespace. It is like a box where a variable name is mapped to the object placed. Whenever the variable is searched out, this box will be searched, to get the corresponding object.

Ans: It is a single expression anonymous function often used as inline function.

Q.19- Why lambda forms in python does not have statements?

Ans: A lambda form in python does not have statements as it is used to make new function object and then return them at runtime.

Ans: Pass means, no-operation Python statement, or in other words it is a place holder in compound statement, where there should be a blank left and nothing has to be written there.

Q.21- What is a module and package in Python?

Ans: In Python, module is the way to structure program. Each Python program file is a module, which imports other modules like objects and attributes.

The folder of Python program is a package of modules. A package can have modules or subfolders.

Q.22- Mention what are the rules for local and global variables in Python?

Ans: Local variables: If a variable is assigned a new value anywhere within the function’s body, it’s assumed to be local.

Global variables: Those variables that are only referenced inside a function are implicitly global.

Q.23- How can you share global variables across modules?

Q.24- Explain how can you make a Python Script executable on Unix?

Ans: To make a Python Script executable on Unix, you need to do two things,

Q.25- Explain how to delete a file in Python?

Ans: By using a command os.remove (filename) or os.unlink(filename)

Q.26- Explain how can you generate random numbers in Python?

Ans: To generate random numbers in Python, you need to import command as

This returns a random floating-point number in the range [0,1)

Ans: To copy an object in Python, you can try copy. Copy () or copy.deepcopy() for the general case. You cannot copy all objects but most of them.

Q.28- What is the negative index in Python?

Q.29- How you can convert a number to a string?

Q.30- What is the difference between Xrange and range?

Q.31- Explain how can you access a module written in Python from C?

Ans: You can access a module written in Python from C by following method,

Ans: Flask is a web micro framework for Python based on “Werkzeug, Jinja 2 and good intentions” BSD licensed. Werkzeug and jingja are two of its dependencies.

Flask is part of the micro-framework. Which means it will have little to no dependencies on external libraries. It makes the framework light while there is little dependency to update and less security bugs.

Q.34- Mention what is the difference between Django, Pyramid, and Flask?

Ans: Flask is a “microframework” primarily build for a small application with simpler requirements. In flask, you have to use external libraries. Flask is ready to use.

Pyramid is built for larger applications. It provides flexibility and lets the developer use the right tools for their project. The developer can choose the database, URL structure, templating style and more. Pyramid is heavy configurable.

Like Pyramid, Django can also be used for larger applications. It includes an ORM.

Q.35- Mention what is Flask-WTF and what are their features?

Ans: Flask-WTF offers simple integration with WTForms. Features include for Flask WTF are

Q.36- Explain what is the common way for the Flask script to work?

Ans: The common way for the flask script to work is

Q.38- Mention the use of the split function in Python?

Ans: The use of the split function in Python is that it breaks a string into shorter strings using the defined separator. It gives a list of all words present in the string.

Q.39- Explain how you can access sessions in Flask?

Ans: A session basically allows you to remember information from one request to another. In a flask, it uses a signed cookie so the user can look at the session contents and modify. The user can modify the session if only it has the secret key Flask.secret_key.

Ans: Flask supports database powered application (RDBS). Such system requires creating a schema, which requires piping the shema.sql file into a sqlite3 command. So you need to install sqlite3 command in order to create or initiate the database in Flask.

Flask allows to request a database in three ways

Q.41- You are having multiple Memcache servers running Python, in which one of the memcacher server fails, and it has your data, will it ever try to get key data from that one failed server?

Ans: The data in the failed server won’t get removed, but there is a provision for auto-failure, which you can configure for multiple nodes. Fail-over can be triggered during any kind of socket or Memcached server level errors and not during normal client errors like adding an existing key, etc.

Q.42- Explain how you can minimize the Memcached server outages in your Python Development?

Q.43- Explain what is Dogpile effect? How can you prevent this effect?

Ans: Dogpile effect is referred to the event when cache expires, and websites are hit by the multiple requests made by the client at the same time. This effect can be prevented by using semaphore lock. In this system when value expires, first process acquires the lock and starts generating new value.

Q.44- Explain how Memcached should not be used in your Python project?

Q.45-What are the built-in types of python?

Ans: Built-in types in Python are as follows –

Q.46- What are Python packages?

Q.47- How can files be deleted in Python?

Ans: To delete a file in Python, you need to import the OS Module. After that, you need to use the os.remove() function.