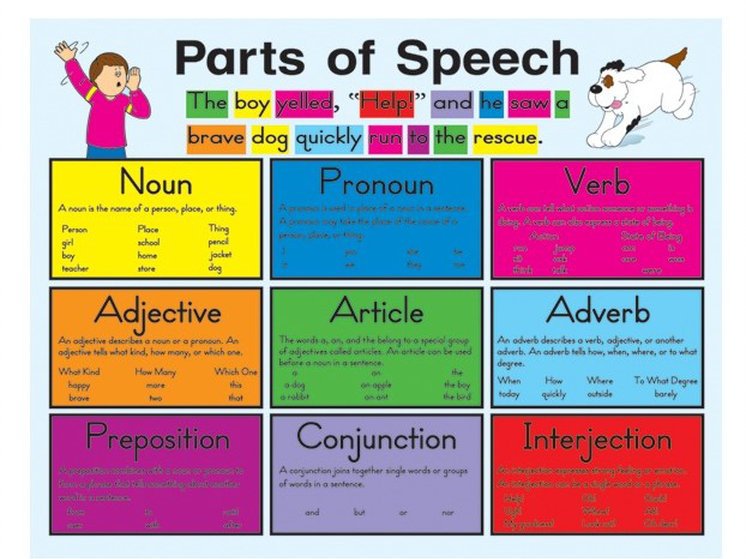 Parts of speech are a way to describe the functions of words in English language.

There are 8 parts of speech.

A noun is a word that is used for some person, place, thing, state, idea or action. They are of different kinds.

There are six types of nouns:

A noun that denotes the matter or substance of which things are made is called material noun e.g, wheat, rice, curd, milk, wood, etc.

When two or more than two words join together, they are called compound nouns e.g, lady-doctor, step-brother, class-fellow, chair-person, etc.

How to make and what are the rules to make plurals noun?

3. Words ending in-Y (if there is a consonant immediately before Y) Y is changed into i and es is added as Family, Families; Century, Centuries; Story, Stories; Body, Bodies; City, Cities, etc.

10. News, hair are plural nouns but they take a singular verb, as His hair is white. What is the latest news?

12. These nouns are used as the plural in sense, Though look singular, Cattle, Gentry, Public, People, Police, Poultry.

14. These words may be made plural as:

15. These words are used as given (in either sense) Mustaches, Spectacles, Tongs, Trousers.

17. Wages are plural in a sense payment for work (also used sing. That is paid for services).

18. Some nouns are exempted from these rules.

Make Plural From The Followimg NOUNS

A pronoun is a word that is used in the place of a noun or noun phrase.

For the use of Possessive Pronouns look at the following sentences.

These are used to relate a noun or a sub-clause to the main clause and serve as conjunctions, e.g.

Who, Whom used for person or persons.

Whose, That used for persons or things.

Which used for animals or things.

What, But, As are also relative pronouns.

Complete these sentences with relative pronouns.

The demonstrative pronoun points towards the noun it replaces, indicating it in time, space, and distance. They are This, That, These, and Those.

I. Use This or These

II. Use That or Those

Verb is a word that denotes an action or activity of a person or thing. They are of three classes.

A transitive verb requires an object to complete its meaning.

An intransitive verb expresses a state or action which affects the subject only.

The word which plays the role of linking or helping in a sentence is called helping verb.

In most cases, ed is put to make the past of a verb. Hence, there are many irregular verbs. A list of these verbs is as.

Spellings of some verbs remain the same in three forms as:-

Cut, put, spread, quit, fit,let, hurt, bet, shut, cast. Verb ending in Y if there is a consonant before y, y is replaced by ied in second and third form as.

Adjective is a word used for qualifying the meaning of a noun or pronoun.

There are two types of adjective especially mentionable.

When an adjective states the kind of the noun it qualifies, it is said to be an adjective of quality. For example; Tall boy, Beautiful girl, Black cat, Good student, and Bad man, etc.

When an adjective states the number or quantity of noun it is called an adjective of quantity .eg, how many, how much, third group, first meeting, last chance, and many girls, etc.

There are three degrees of an adjective.

It is used to compare a thing or person with another; as, More, Poorer, Wiser, Higher, and taller, etc. Than is used with a second degree of an adjective.

The general rule to make a comparative degree and superlative degree, we put er or est with the positive degree of an adjective. However, here are some irregular adjectives exempted from the above-mentioned rules. They are:

In case of other adjectives more and most are used before them for making comparative and superlative degree. As,

“Difficult: more difficult; most difficult”, “Beautiful; more beautiful; most beautiful”. To is used with inferior, superior, junior, senior, prior, and elder, etc.

An adverb is a word used for qualifying the meaning of verb, adjective or other adverb. According to their meaning, they can be grouped in the following categories.

i. Adverb of Manner/ Quality or State

It indicates how the action takes place. As;

It indicates where the action takes place. As;

It denotes when the action takes place.

In a normal sentence, the adverb manner comes first; it is followed by the adverb of place and then comes the adverb of time; as “Sabiha stood first in the annual examination last year”.

Here is a list of adverbs. Fill in the blanks with these given adverbs.

A preposition is a word used before a noun or a pronoun to show its relation with another person or thing. Examples on, in, of, off, up, into, over, under, after, about, against, below, at, with, to, by, for, since, from, upon, through, along, and above, over.

He is ashamed of his behavior. 2. He is looking for his book. 3. Mr. Riaz is very popular with his students. 4. The patient is being operated upon. 5. They were running after a thief. 6. He is hidden behind a tree. 7. Divide these mangoes among all the boys. 8. Divide these apples between two brothers. 9. Open your book on page ten. 10. He writes in red ink. 11. I congratulated her on her success. 12. He does not care for anyone. 13. Always keep to the left. 14. Sidra works according to the time table. 15. I am thankful to you. 16. He will take revenge on you. 17. Hard work is the key to success. 18. You should not be indifferent to your studies. 19. Who will succeed to him? 20. I introduced him to my friends. 21. Is there no remedy for this disease? 22. Solve this sum within ten minutes. 23. She looks after her children. 24. He has no control over his feelings. 25. Saif lives at Sultan Pura in Gujranwala.

Fill in the blanks with a suitable preposition:

It is a word used for the joining one sentence to another. These words are used as Conjunction; and, but, or for, nor, yet, though, as before, since, if, while, unless, until, as soon as, as long as, etc.

They are; that, who, which, when, where, why, how, whenever, while, unless, whoever, if, and because. They make complex sentence.

They are; and, but, or, yet, and nor. They make compound sentences.

Complete these sentences with suitable conjunctions.

Complete these sentences with the help of these question words.

It is two types

Definite Article: The is a definite article and used in these cases.

It is not used before

A or an is an indefinite article. It generalizes a noun.

Fill in the blanks with the, a or an

Complete with the, a, and an.

One thought on “Parts of Speech”