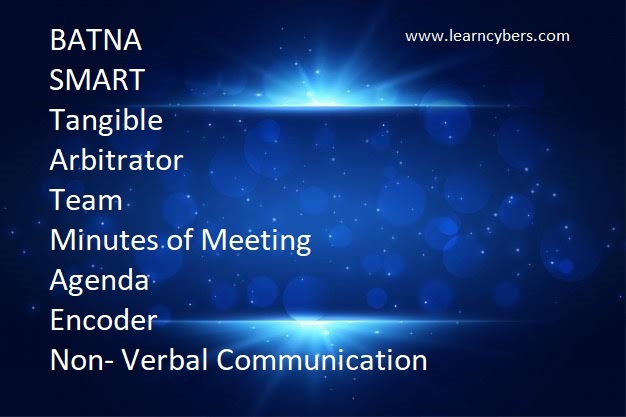 Capable of being touched. Real or actual rather than imaginary or visionary. Not vague, capable of being perceived by sense of touch. Having actual physical existence as real estate or chattels, and therefore capable of being assigned a value in monetary terms. T.V are those values which can be seen, touched and felt, in other words, they are physical values. Examples of T.V include; cars, dresses, food, etc.

A person or one of two or more persons, chosen by parties who have a controversy, to determine their differences. An independent person or body officially appointed to settle a dispute (adjudicator, arbiter, lines man, referee, line, judge, etc).

A team is a group of people/ individuals working together to achieve their goal or a number of persons associated together in work or activity. A group of people who work together at a particular job- a sales team, cricket team, a group of people with a full set of complementary skills required to complete a task, job, or project.

Minutes of the Meeting

Minutes of the meeting can be defined as written or recorded documentation that is used to inform people of what happened during the meeting and define the next step planned. Brief record of proceedings of a meeting rough draft.

An encoder is a person who sends a message to another person. (sender of the message)

Communication without words is called non-verbal communication. It consists of:

A meeting agenda is a list of items that participants hope to accomplish at a meeting or a list of meeting activities in the order in which they are to be taken up, beginning with the call to order and ending with adjournment. It usually includes one or more specific items of business to be acted upon.